Let’s start at the very beginning…

Ideas seem to hang around…  Lately I’ve been going back over old scribbles and fragments, and I’ve found the very first notes I took for The Daemon Parallel, way back in September 2005.

I’d had a really bizarre dream, about a boy living with his Gran. In the dream she sent him to buy something

from the local corner shop, but the world outside was all twisted and surreal – both like the Edinburgh I knew, and different at the same time, with monsters lurking on every corner (and a cyclops behind the shop counter). When he got back, despite all the danger he’d been through, she didn’t seem particularly pleased to see him…

It was all very vivid. When I woke up, I started to ask questions. Why was the landscape all mixed-up? Midway between the ordinary world, and the world of monsters, there could be another place where the two mingled… Why was the boy living with this old woman? His mum had left him, his dad had died. He was all alone… Why would he stick with her, if she was so cold? She’d offered him something he couldn’t refuse, the one thing he wanted more than anything else in the world…  She’d offered to bring his Dad back from the dead! (Could I really write that? Could I get away with it? Could I make it work?).

By the time I picked up my notepad, I had the beginning – and end! – of my story. None of my characters had names, and some major players had yet to be devised, but I knew my main character’s journey. Reading back over those four-and-a-bit pages, I’m amazed to see pretty much everything I jotted down made it into the final novel.

But I didn’t start writing immediately! I don’t know why. Perhaps it was fear I wouldn’t get the story right.

Perhaps it just needed to sit around a bit, to fester and mature… Looking through my files, I see I had a first go that October. I got a little further; I found out what the boy’s father did, and how he’d disappeared. But the setup seemed to drag, and the Granny figure came out too arch – a cross between Endora in 60s sitcom Bewitched and a flamboyant English teacher I’d once had – extraordinary, but not very spooky. The story went back in the drawer.

One year later, I tried again. This time, I leapt straight in at the bit that I knew scared and excited me the most – the bit I didn’t know if I could make work. I wrote:

It was over coffee and biscuits that Grandma Ives
offered to return Cameron’s father from the dead.

…and the first chapter seemed to flow straight on out! It would take a few more years, and a good few drafts, till I had the version I’d eventually send to a publisher. But the story was ready to be told.

Now I’m working on new novel ideas, and I’m suddenly wondering: perhaps the story I really need to tell is lurking in an old notebook. Perhaps it’s already there, waiting to be discovered. And the ideas that scare me – the things that I think I can’t make work – they’re probably the ones to concentrate on.

What do you think? How do your story ideas arrive? Do you write them up straight away, or do you leave them in the dark for a while, till they’re ready? Leave me a comment, and let me know!

I’m not the world’s fastest blogger. A lot has happened since my last post back in August. Most significantly, my novel was picked up for publication by Floris!

The night of the Kelpies prize was extremely exciting and high tension, with guest speaker Lari Don keeping us all on tenterhooks to see who’d won. Somewhere, in whatever vast warehouse they store all the bits and pieces they use to make up the Edinburgh Book Festival – chairs and PA systems, stages and bars, tents and confused authors – there’s a  table with a perfect set of fingerprints embedded on the underside of its metal top: that’s how tightly I was hanging on…

(Pic shows the shortlist: Alette Willis, me, and Daniela Sacerdoti eagerly awaiting the result. I’m the one who doesn’t appear to be sinking into quicksand.)

Although I didn’t win, I soon got some great news. Sally Polson, commissioning editor at Floris, came over to tell me she’d loved my novel, and they’d like to publish it, and could I come into the office on Monday? I quite literally jumped for joy. There may have been some undignified whooping and yelling too, but the less said about that the better…

At Floris HQ – in a ground floor tenement near Harrison Park – the following Monday, Sally talked me through the parts of the Daemon Parallel she had most enjoyed, and some of the bits she thought could do with a trim, or further explanation. “We’ve got something to show you as well,” she said, reaching into a desk drawer. “We’ve had an artist working on the cover for your book. What do you think?”

…and there he was. One of main characters – I’d tell you his name, but that’d be a SPOILER! – green eyes blazing, teeth barred, biker jacket flapping as he pounded up a steep and greasy set of steps from MORE SPOILERS! straight towards me.

I think I stared at that picture all the way home on the bus. Even now he’s tacked-up over my desk, glaring at me and challenging me to get on and write…  I’m still a little amazed. Something that started out in my head now had a life of its own.

And that would just be the start… 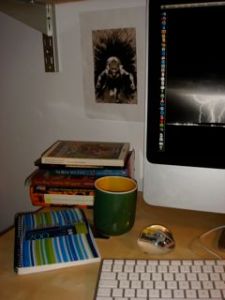