Ended up writing a new Parallel short story for the Author Allsorts blog. Set after the events of Werewolf Parallel, readers of my books may recognise a location and character… 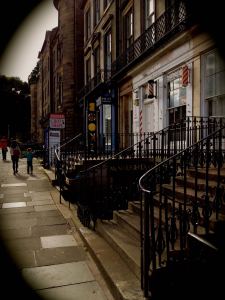 I could shut up early, but I know the old man wouldn’t be pleased. “It’s enough time for a cut,” he’d say. “Enough time to trim the sides of a baldy old geezer like me.”

“Yeah, and baldy old guys only pay three pounds,” I’d argue, and he’d point out that all those three pounds add up, and if they didn’t, we’d be out of a job.

So I hold on, twiddle the radio dial away from moody 90s rock to something less depressing, look out into the Edinburgh night…

There’s a scrabbling scraping sound, something previously masked by Thom Yorke’s wailing. I ignore it at first. Asif’s Barbers is on the ground floor of a tenement. It’s an old, old building. It’s not unusual to hear clunks and groans. We’ve got neighbours above, to the sides, below – 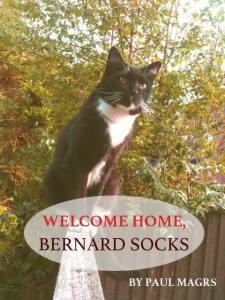 This past week I’ve been reading Paul Magrs’ Welcome Home, Bernard Socks: the sequel to last year’s Story of Fester Cat.This second volume of memoir feels like a return visit to old friends: it’s just as vivid, warm and compulsively readable. Once again, we encounter Paul scribbling away in his garden den, Jeremy rambunctiously righting wrongs, and a distinctive feline companion that helps bind their lives together in their cosy book-filled home…

Bernard Socks turns out to be a very different character to his predecessor, Fester (who nonetheless keeps an affectionate and sometimes exasperated eye on proceedings, narrating from sidelines). Picked from a rescue centre – whose staff and inhabitants are well described by Magrs’ vivid pen strokes – Socks is a bundle of energy, combative and adventuresome. One of my favourite sections of this book is the wild chase Socks leads Paul and Jeremy on across their neighbourhood: scrambling over gardens and up scaffolding until he finally becomes embroiled in a Midsummer carnival attended by cats both present and long since departed. It’s one of those characteristic imaginative leaps from the everyday into the fantastic that I know will delight readers of Paul’s work.

Where this volume differs from the previous memoir is, I think, the tone is perhaps in places a little darker. Fate deals the boys some cruel blows: there’s the loss of an old friend and corresponding thoughts on memory and family, and a builder’s accident which leads to the wrecking of much of Paul and Jeremy’s home. The Story of Fester Cat was a celebration of a life and also a story of healing after the loss of a beloved pet – I get the impression that this time round wounds are still a little fresh, and challenges ongoing. Of course, all of this makes me eager for a third volume – not only so I can spend a little longer in their world, but also because I want to know everything is going to be all right. Bernard Socks has arrived – let’s see where he takes us next!